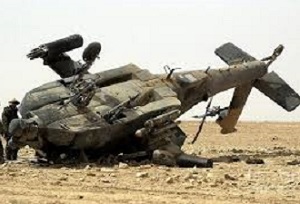 ‘Like hand grenades, helicopters should only be used once’.

Aviation safety experts have warned passengers and pilots alike of the dangers of using a helicopter more than once.

But Nicola Bentley of the ‘Land Once’ campaign insisted that choppers are perfectly safe, as long as they’re destroyed immediately after their maiden flight.

“Given their enormous expense and technical complexity, some  people might be tempted to get back in a used helicopter and make a return journey”, explained Bentley. “But our advice is ‘don’t’. Helicopters are a lot like matches, condoms or carrier bags in that respect: only a moron would attempt to re-use them.”

Bentley is calling for clearer labeling on helicopters, as well as the removal of temptations such as fuel filler flaps. “Don’t get back in it, for God’s sake don’t refuel it, and don’t ever attempt to switch the big fan back on”, warned Bentley.

“If you survived that first flight, then it’s already done it’s job as well as can be expected”, she insisted. “If you must do it again, make sure you use a new one.”

Bentley would like to see proper disposal facilities provided at heliports, to reduce the temptation to secondary hover. “Set fire to it, break it up into tiny pieces and scatter it over a wide area”, is her advice. “Which coincidentally is what most helicopters do automatically, if you try and take off again.”

Comments Off on Safety experts warn: ‘never re-use a helicopter’