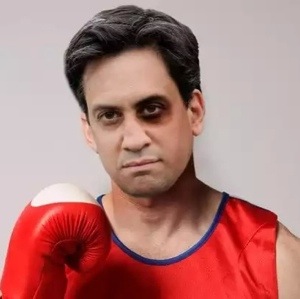 Despite the criticism Newcastle United’s Alan Pardew has received from the public, football experts and Robbie Savage for his headbutt on a Hull player, Ed Miliband has said he can see the merits of the management technique of ‘laying one on the nut’ of the opposition’s team.

‘I wouldn’t normally advocate violence unless it involved an army, dodgy evidence and was in a country far from here” the Labour leader said.

“But after watching Match of the Day, the more I think about it the more I can see the benefits of moving Michael Gove out of my way in the voting lobby by “pushing him” with my head.

“I have run the idea past some of the union leaders and they have agreed if I can ‘move my head’ in the general direction Ian Duncan Smith they will pay the fine.”

He was asked whether he would be limiting his new-found management technique to opposition players or will he be extending it to David Cameron.

“I actually look forward to going in goat-style on Jeremy Hunt, but in a battle of foreheads with David Cameron, there will only be one winner.”