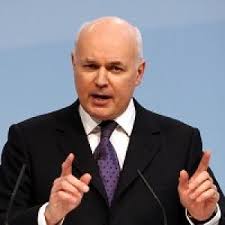 Workers who are sick and off work for more than four weeks will soon get  government sanctioned advice, to help them get back to the workplace. The Health and Work Service’s default advice will be ‘get back to work you idle sod or you’ll regret it’, although the new   government-funded agency will also offer non-compulsory amateur medical assessments and d.i.y. treatment plans.

Duncan Smith believes a much-needed economic stimulus would be provided if the bedridden could be genitally-tasered and has personally volunteered to pull as many triggers as possible.

“ Fear is a powerful weapon in my department’s armoury in the assault on the powerless.” says Work and Pensions Secretary Iain Duncan Smith “We’ve already seen its great effect with longer term sickness benefit – when we introduced capability tests the number of claimants fell by a million and the sales of  diarrhoea medication and toilet paper rose by 25%”.

“The mere threat of 50,000 volts being applied somewhere in the trouser-region should have a similar effect on these shorter-term malingerers.” asserts IDS “If not, then a swift tasering should at least shock them out of their complacency and certainly out of their beds.” adding “But just suppose that doesn’t work, it will still be great fun for me”.

Tory party Chairman Grant Shapps is a great supporter of the scheme: “One of the cruellest things about our welfare system is that it traps people into a life on welfare. It has become literally cruel. In those circumstances, poking the sick with a super powerful electric Jedi-Wand doesn’t seem all that bad.