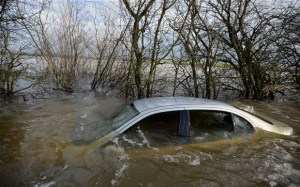 Having a bit of trouble getting in is no reason not to attend work.

Iain Duncan Smith has stopped all benefits for people living in flooded areas after branding them all scroungers.

“Just because your home and community are underwater that’s no reason not to be making a contribution to society like millions of hard-working tax-payers up and down the country,” the Secretary for Work and Pensions said. “It has come to my attention that those in receipt of benefits and living in the worst hit areas for flooding are responsible for shockingly high rates of workplace and job centre absenteeism and this is unacceptable.”

“Take for example the couple who receive working tax credit but have simply not bothered to attend work for several days. When benefits agency staff visited their ‘supposed address’ there wasn’t even a Lobelia Avenue, much less a number 17. There was in fact a rather pleasant lake that was for some reason surrounded by layabouts doing nothing but splashing around in their Wellington boots in the middle of the day when they should be out grafting and striving, not shirking and calling Owen Paterson rude names.”

He went on to praise one elderly man who was widely featured in the media yesterday as he went about his job in Somerset.

“That’s the kind of initiative this country needs,” Duncan Smith said. “That man didn’t sit around complaining and asking for handouts, no, he got out rolled his sleeves up and jolly well went around a village looking awkward on the back of a tractor trailer.”

When it was pointed out to Duncan Smith that that man was in fact Prince Charles he did not have the decency to look embarrassed and went on to claim that he could easily live on £53 a week in a house that was underwater if he had to.