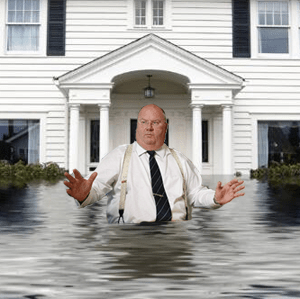 Eric Pickles does his bit for flood defences.

The Environment Agency is poised to commence a new Government venture today in an effort to protect Britain’s coastlines from further flooding caused by the current storms battering the South West.

It has been feared that budget cuts will have severe impact on the department’s ability to respond to emergencies. However Environment Secretary Owen Patterson has responded to these claims with the announcement that Civil Servants will be used to replace traditional Sea Defences. “Inanimate, deadweight and wet, Civil Servants make the ideal replacement for the sandbags we can no longer afford.” he told the commons yesterday.

Accused by some MPs of being out of touch with the reality of the situation he responded “I too have been felt the force of these storms first hand, only yesterday on the trip from my front door to the car, my aide’s umbrella was blown inside out leaving me slightly damp, and two of my standard roses blew over, smashing one of their pots”

Labour MPs claim this is simply a replication of their own scheme which has seen them using Ed Balls as ballast for years as they try to anchor onto some policies.

Comments Off on Floods latest: MPs accused of ‘sandbagging’