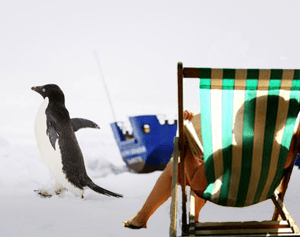 Climate scientists rescued from a trapped research ship in Antarctica have claimed that their computer models ‘accurately predicted’ that they would get stuck in the first place.

The diesel-powered research ship MV Akademik Shokalskiy had set out on an 8,000 mile journey to highlight how normal people ought to cut down on unnecessary journeys.

But after grinding to a halt in unusually thick pack-ice, climatologist Dr Alan Pecher claimed that it ‘just proved how much hotter the South Pole has become’.

Standing on the deck of the stricken vessel wearing sun-block and Speedos, the scientists spent several hours complaining that they ‘could definitely feel it getting warmer’.

After enjoying a game of volleyball, a quick paddle and emergency treatment for hypothermia, Dr Pecher revealed that rising temperatures often cause massive areas of the ocean to freeze over unexpectedly.

“According to our model, this can all be blamed on a pensioner with a gas-guzzler in Dorset”, claimed Pecher. “If he’d bought a diesel Ford Fiesta or even better, used his bus pass, then we wouldn’t have all been stuck here burning our butts off.”

Furtunately for Pecher the crew was rescued with only a small amount of fuss, involving three massive ice-breakers and a helicopter. “Although there were some fossil fuels involved it doesn’t count because we’re scientists”, he explained.

“If our experiment makes just one person feel guilty about having to drive to their office, then really, we’ve achieved what we set out to do.”

The trip has been so successful that plans are already in place to recreate the voyage early next year. “It’s an ideal opportunity for ethical holiday makers”, said Pecher. “It’s a great way of showing your neighbours just how green you are.”

Critics have claimed that the voyage is a massively hypocritical waste of time, but Pecher has offered a solution. “It’ll be carbon-neutral once we offset the fuel used”, he claimed. “It’s a simple matter of replanting the entire arctic region with palm trees.”

4 Responses to Climate scientists ‘accurately modelled’ own entrapment in ice