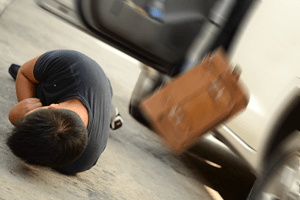 School run mums in Harold are teaching their children to exit vehicles at speed, to avoid fines from council stooges with cameras.

Dozens of parents have been fined for parking illegally while dropping their kids off at the local primary school, with photographic evidence being used to make the charges stick in court.

But desperate families who live some 1200 yards away have adopted an alarming new technique, which involves ejecting children at speeds of up to 20 miles an hour.

“Parking never used to be a problem”, claimed mother-of-two Carly Jeffery. “There’s 48 parking bays right next to the playground. But recently, two-thirds of the spaces have been blocked by white vans with blacked out windows, with the sound of whirring cameras and bright flashes coming from inside.”

Local residents have slammed the reckless new trend, complaining that the inconvenience of brief screams and dull thuds could affect their house prices.

“It’s a nightmare, for 20 minutes or so every morning this street is littered with tiny bodies, the groaning really puts me off my breakfast”, complained pensioner Harry Jones. “Then one by one, they drag themselves to their feet and assist the most wounded into assembly before I have to go out with a hose to wash all the tears from the pavement.”

“I’m beginning to think this is nearly as bad as having my drive occasionally blocked by a Nissan Qashqai.”

The school accident book currently runs to four volumes, with the majority of injuries being grazes, mild concussion and post traumatic stress disorder.

“The school nurse is at her wit’s end”, said head mistress Alison Lee, “she’s not seen anything like this since her time working for the Viet Cong. It’s a difficult situation but it does have its upsides. For instance, most of Year Two learn to reset a dislocated collar bone before they can tie their shoe laces.”

School governors are looking into options that might improve the situation, such as relocating the school to a covered trolley bay in Tesco or insisting packed lunches use thick slice in order to cushion some of the blow.

But Carly Jeffery rejected one particularly radical solution. “Make them walk to school? You must be mad: that just doesn’t sound safe.”