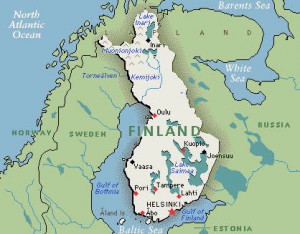 Following its acquisition of Nokia phones, Microsoft has surprised cartographers by withdrawing all support for Finland.

Famed for its ability to absorb popular things and then fundamentally ruin them, Microsoft has already gained valuable experience in making phones virtually unusable with its Windows 8 operating system.

But while the corporate giant has been happy with only wrecking trivial things such as Skype, video games and social media, it now feels the time is right to bugger up a whole country.

Nokia’s vice-president Stephen Elop moved to the company from Microsoft in 2010, but disappointed the software giant by making their phones slightly better. Unwilling to risk another resurgence of the once-great mobile manufacturer, Microsoft is taking immediate steps to remove all traces of Finland.

“We had thought of declaring that our phones contain sarin gas”, revealed Elop, “but it turns out that’s no longer a sure-fire way of removing a country from the face of the Earth.”

Instead, Finland has been quietly removed from Bing, Wikipedia and Word spell check, so that everyone can quietly forget about it.

“It wasn’t as easy as that sounds”, said Elop. “It took us a while to find it on Bing maps. For some reason, it was just off the coast of Peru. But our crack team of experts have ensured that the place is now out in the cold, which ironically is roughly where it should have been in the first place.”

Protests in Helsinki have raged through the night, with all 7 residents shrugging and looking fairly disappointed. “I will make my thoughts on this matter known using Twitter and Facebook”, roared activist Onni Aalto. “Just as soon as a software update allows them to work properly on this f***ing phone.”

Comments Off on Microsoft announces Finland ‘no longer supported’