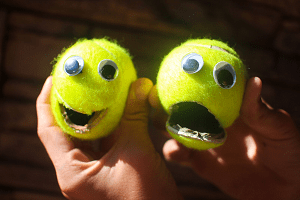 11.00 Not long to wait now. We’re on Court no.1, where the reek of smugness is already radiating off the crowd. Some are wearing ‘fun’ hats, others are tucking into strawberries. Lovely. What a delightful group of tennis aficionados, as opposed to ‘stupefyingly dull pricks’ that Neil from Derby has just suggested by text message. Steady on Neil, you sound like a communist.

11.20 At last it’s time for the official warm-up session, where members of the public practice looking surprised when they’re picked up by the TV cameras. A coach is showing them how to master the ideal combination of delight and embarrassment, without slipping into crude, sexually suggestive hand gestures.

11.30 A small man dressed like Alan Partridge has climbed into a massive children’s high chair. Christ knows how much he paid for that ticket. The perverted little freak.

11.32 Boris Becker is next door, practicing doing his German accent. You’re not fooling anyone you know, Boris. You’re ginger for fuck’s sake.

11.34 Some tennis has started and its wonderful to see. Reading this blog can give you just a hint of what its like to actually be here, but you’ll never really know, you parochial prole.

Susan from Middlesex tweets: OMG! Wimbers is totes amazeballs! Such a long wait before I’m there for the final!

11.47 Wonderful stuff! A grunt, a ball, a puff of chalk dust, a chinless man pumping his fist. Sheer poetry. Anyone who says tennis is ‘a bit shit’ would surely be eating their words after that artistry. I’m talking to you again, Neil.

12.04 The players are changing ends. Wish they’d make their bloody minds up.

12.40 Oh ho! A real moment of humour there, lovely to see. The ball boy wasn’t deferential enough by far but instead of giving him a hiding, the player mimed tying a noose round his neck and hanging him from the new glass roof. That cheeky little wink tells us he was at least half-joking, although driving his racquet into the boy’s face may have been taking the joke a little too far.

13.45 An upset! Goodness me! Martin from Bletchley has cracked the tennis code! ‘If you double the last point, multiply the difference between the two previous two points by one and a third and then subtract the result from the former, the next tennis number is 70. It should be 0, 15, 30, 40, 70′.

14.20 Murray Mound is really starting to get crowded now, by the sort of people that can’t afford to come inside. To think of all those unwiped working class bottoms sitting on a filthy patch of dirt, and then sharing the same carriage as me on the tube a bit later. This tennisl lark really does make the hairs on the back of your neck stand up sometimes. I should have had a taxi fare written into my contract.

14.50 Nail-biting moment! Just as the tennis man was about to bounce a ball on the floor, someone shouted out the name of his opponent. You could have heard a pin drop. His lip started to quiver, his eyes moistened up, but somehow he held it together. They’re made of stern stuff, these tennis chaps.

Gary from Towcester writes: ‘When the older of the Williams sisters is playing, does ‘Murray Mound’ change to ‘Mons Venus’?’ I don’t know Gary. And please stop sending me pictures.

15.02 Still some tennis here, and there’s no sign of it getting dark yet. This could go on for quite a while…oh no wait, both of the players have injured themselves of yawning and have withdrawn from the match. I expect that’s the grass’s bloody fault as well.