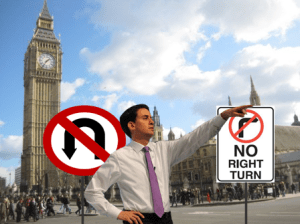 Miliband was asked to point left for photographers

With motorway police getting new powers to issue on-the-spot fines and penalty points for offences such as middle-lane hogging, police in the Westminster have asked for similar powers to reduce the increasing amount of careless manoeuvres such as u-turns.

The latest person found to be caught making unexpected moves is Ed Miliband, who has been witnessed committing a number of dangerous u-turns around his financial policy. Under the proposed plans, this would have resulted in a £60 fine and three points.

Although all images of the offence make it look like he was in charge, others have suggested he may have just been a passenger. “We are looking into claims that Mr Miliband may be in a similar position to Vicky Pryce” a police spokesman said. “He is being used to take the blame to protect the political career of someone close to his heart”

This is something the Labour party have denied. “Despite all the rumours I am not in the driving seat” shadow chancellor Ed Balls told reports. “It may not always look like it, but I assure you Ed Miliband is in control. At best, I am more like his sat-nav guiding him to his final destination, the job centre.”

Mr Miliband may find himself picking up another penalty after his decision to keep the benefit cap was caught tailgating the one to keep the upper limit on child benefit, a move that may still result in a bit of a car crash.

“After many years of coasting along in the slow lane, the pressure to announce some policies has seen Mr Miliband’s driving become erratic and occasionally reckless” the police spokesman told us. “But we hope these new powers will enable us to punish him for his most dangerous manoeuvre. He appears to be driving on the left, but then veers sharply to the right.”