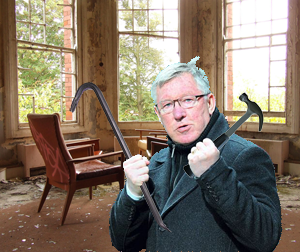 Sir Alex ‘too tight’ to get a man in.

Despite being at a loose end for over three weeks now, retired Manchester United manager Sir Alex Ferguson ‘still hasn’t put those bloody shelves up’, according to his wife Cathy.

Sir Alex has been promising to tackle various odd-jobs around the home since 1986, when he first moved the family for his new senior administrative role with a popular sports team in Manchester. But while most men retire around the age of 65, Cathy claims he ‘deliberately kept going into his 70s’ to avoid the looming spectre of DIY.

“Alex claims he’s good with his hands, but he’s not so much as rewired a plug since the early 90s”, revealed Cathy. “And when I say ‘rewired’, I mean ‘shouted at its metal little face for 94 minutes and then hit it with a shoe.”

In fact Ferguson’s approach to home maintenance could mean he’ll never manage to get the shelves up, which are made of black veneered chipboard and came from an MFI sale in early 1987.

“Alex tackles most tasks by shouting a lot, or stomping around in a huff”, revealed Cathy. “That sort of works on the lawn, but it certainly doesn’t load the dishwasher.”

Celebrity DIYer Handy Andy sounded really surprised when we phoned him to see if he had any tips for Sir Alex. “You remember me? Corr that’s brilliant, wait ‘til I tell me mates”, he explained.

According to Handy, Sir Alex will need to grasp the basics before he can tackle his erection problem. “You need to be methodical, and not fly off the handle”, he said. Handy is optimistic that the task is well within Sir Alex’s grasp, and pointed out some transferable skills that should help him on his way.

“Chewing gum should help him stay calm, and taking a break every 45 minutes helps to clear the mind”, said the MD of MDFing. “It’s a game of two halves, is putting up a shelf.”

“And when you think about how he handled Beckham and Rooney for all those years without so much as a splinter, that tells me he should have no trouble cutting two short, thick planks down to size.”

Sir Alex responded by claiming his wife needs to be more patient. “I’ll get them stuck up soon enough with some of my old gum, she just needs to give me some added time. I grew used to that at Manchester United.”