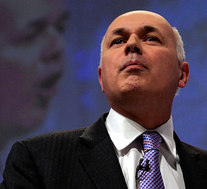 Is this man a danger to the public?

An attempt to prove that Atos assessments are fair and transparent spectacularly backfired today when the Secretary of State for Work and Pensions, Iain Duncan Smith, was declared unfit for work.

The assessor ruled that Duncan Smith lives largely in a fantasy world as evidenced by his misuse of statistics to prove points both in the media and the House of Commons and the lies which were present on his CV until a Newsnight exposé forced him to change it. Despite his highest qualifications merely being A’levels, Duncan Smith had claimed to be a graduate of the Universita di Perugia and to have been educated at Dunchurch College of Management. This inflation of his academic record was classified by Atos as being symptomatic of  a severe case of an illness commonly known as a touch of  the Archers.

“The real risk factor with Iain Duncan Smith staying in employment is his obvious sociopathy,” an Atos spokesperson explained. “We could find no evidence that this millionaire who earns £134,000 a year plus expenses as a cabinet minister, is married to an aristocrat and lives on the Buckinghamshire estate she inherited from her father has a shred of compassion for his fellow man.”

They went on to cite numerous examples among them Duncan Smith telling disabled workers at a Remploy factory: “Is it a kindness to stick people in some factory where they are not doing any work at all? Just making cups of coffee?” while overseeing the closure of thirty-four Remploy factories resulting in over 1,700 job losses something which he described as “getting people into proper jobs” although he remained silent on exactly where those jobs were supposed to come from when there is currently an average of eight people chasing each vacancy.

It was also noted that Duncan Smith’s illness is such that he is incapable of recognising the damage his draconian benefit cuts are inflicting. In January 2013 the government’s own figures put the number of people who have died since being told to go back to work by Atos at 1,300 with a further 2,200 passing away before their assessment could be completed. There have also been suicides due to benefits being stopped and the implementation of the bedroom tax as well as a sharp rise in homelessness, depression and people being forced to rely on food banks in order to survive.

Atos recommended that he be removed from office immediately and placed in a secure location where he could receive help and no longer be the danger to the public that he quite clearly is.

“Also, he should be prevented from writing any more books,” said the Atos spokesperson. “Anyone capable of writing one as bad as The Devil’s Tune must be stopped.”