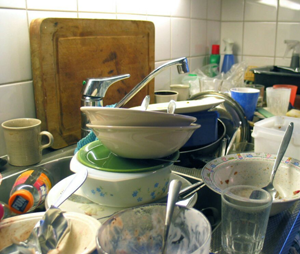 A fitting tribute to Pat.

Concerned employees at Amalgamated Holdings Ltd have been mystified by a growing collection of soiled cups.

Initially, minor queries were raised with each other about whether the cleaning contract had been renewed, not realising that for the last 15 years the dishes had been done by Pat in accounts.

“I do like a cup of tea first thing” said managing director Justine Hostage, “and I never gave a thought to how our mugs got clean and put back in the cupboard. It was Mike who said he’d seen Pat doing it before, and then we realised no-one had heard from her for three weeks.” END_OF_DOCUMENT_TOKEN_TO_BE_REPLACED

No man can win Masterchef while new ‘washing up round’ remains

Male Masterchef contestants have complained that they ‘have no way of winning’ following new rules that mean they have to leave the kitchen tidy.

While soufflés and reductions hold no fear for men in the tea-cooking contest, wiping a damp cloth around the worktops afterwards is more than many can manage.

Hosts Gregg Wallace and John Torode have winced at the attempts by some men to clean up after themselves. They fear that just the thought of having to leave the place spotless will make many contestants ‘dumb down’ their menus to avoid mess.

Extracts from last night’s show seem to support this. 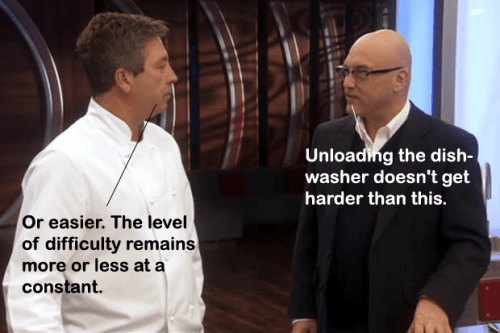 Fisher (voiceover): Ricky has made his signature dish of cooled-over beans served in a tin cylinder. His workstation remains spotless.
END_OF_DOCUMENT_TOKEN_TO_BE_REPLACED