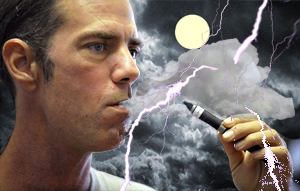 The current spate of early morning mists, turning foggy later, followed by torrential downpours across much of Britain is directly proportional to the recent upsurge in the number of people vaping.  That was the stark warning today from Harold’s newest resident, ‘observational climatologist’ Mike Anderson.

Mike spends his day ‘hanging round and commenting on the weather’.  He is the author of ‘British Weather, An Introduction’ and his latest research centres round a noticeable increase in the number of people vaping, measured against general wetness.  ‘It is just a theory at this stage,’ he said, ‘but so was Higgs boson.’
END_OF_DOCUMENT_TOKEN_TO_BE_REPLACED