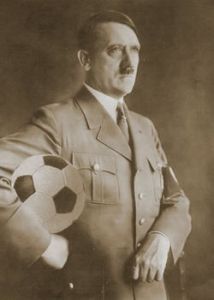 Following German historians’ discovery that Adolf Hitler did indeed only have one ball, a team of testiculologists at the Albert Hall have announced the surprise discovery of the other one.

German historian Peter Fleischmann recently found medical records confirming that Hitler suffered from “right-side cryptorchidism”, but it was some time before anyone realised that this actually meant the hilarious one-ball thing.

Although the fascist leader’s monotesticularity has long been a cause of speculation, leading historians urged against leaping to conclusions.

A. J. P. Taylor, author of Triumph and Testicles, the Origins of the Second World War, argued that the Albert Hall link was far from proven, saying:

“While popular belief has it that the deficient testicle must be found in the Albert Hall, many other equally plausible theories exist.”

“For example, one respectable school of thought maintains that the Albert Hall idea is a red herring, and that research should instead be carried out into the notion that ‘Goering had two but very small’.”