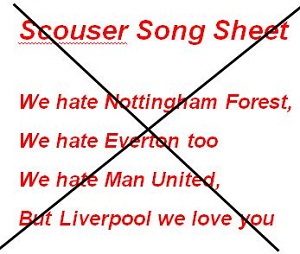 Left Back in the past

Following discussions with human rights campaigner Peter Tachell, the Police have decreed that all chants and songs will be monitored to ensure that they are appropriate and politically balanced at all times.

Failure to adhere to the new rules could result in a ban and fans will be unable to travel to Brazil to support England in the World Cup. Not that they will be allowed to only support England as that would be biased which is strictly prohibited.

As the traditional “We hate Nottingham Forest” song is now outlawed, the Evening Harold has provided the following a new song for fans everywhere: END_OF_DOCUMENT_TOKEN_TO_BE_REPLACED

Comments Off on Launch of Politically Correct Football Song: ‘We love Nottingham Forest …’