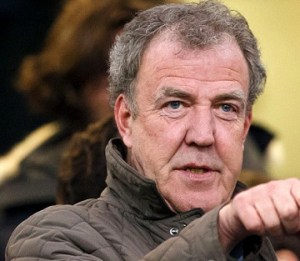 In his first comment since being dropped from the TV show Top Gear, Jeremy Clarkson has said he will miss punching people in the face.

The presenter was writing in his first column for the Sun since he was released from the show on 25 March after an “unprovoked physical attack” on a producer.

“Heartfelt thanks to all those who have written to say how much they will miss me on Top Gear,” he wrote. “It’s not as much, however, as I’ll miss being there.”

“Mainly,” he continued, “the sensation of smashing my knuckles into the face of someone who fears for their job and has done nothing wrong except working on the same show as a bullying overweight twat. You know, those sorts of things. Specifically, the punching.” END_OF_DOCUMENT_TOKEN_TO_BE_REPLACED

Comments Off on ‘I will miss punching people’ says Jeremy Clarkson