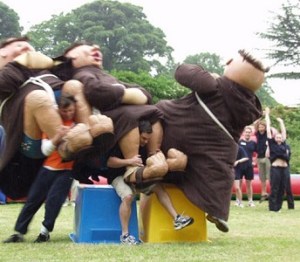 Daily struggle to fit in

Asylum seekers in Cardiff face humiliation by being forced to wear distinctive costumes from the old TV series It’s a Knockout, it emerged today.

In order to qualify for food and housing, the refugees must dress up as grotesque ogres, bloated Tweedledums or even monstrously inflated parrots, according to complaints made to journalists.

One asylum seeker explained the unpleasant conditions his family faced: “In order to qualify for food, I had to dress up in a ridiculous French waiter costume with a massively over-sized head, and negotiate a slippery obstacle course while being sprayed with water.”

“Hardly any of the locals had giant heads, so everyone could tell straight away I was a refugee. To make it worse, I kept slipping over on the giant turntable when they sprayed water on me, and there was a guy with a microphone laughing his head off and shouting ‘HERE COME THE SYRIANS!'” END_OF_DOCUMENT_TOKEN_TO_BE_REPLACED