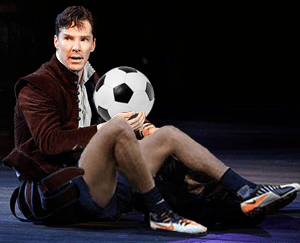 It was a play of two halves.

For those of you unable to make the long awaited opening night performance and unable to view it on You Tube thanks to a rather unreasonable ban on mobile filming, our Arts Correspondent Mariella Buss-Stop puts down her pint and casts her eyes over the cast’s performance at Elsinore last night.

From their hissed greeting at the appearance of old King Hamlet’s ghost to the mass weeping hysteria when the great one dies, the pubescent Cumberbitches’ in the audience made their presence felt last night at the Barbican. It could take days to mop up.

Here are my ratings for the players:            END_OF_DOCUMENT_TOKEN_TO_BE_REPLACED