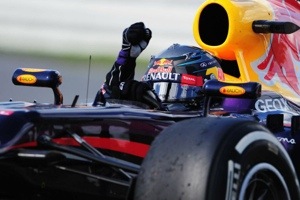 He doesn’t mind racing in countries with human rights issues, but he won’t race south of the river

Following Sebastian Vettel’s fourth Formula 1 world championship win in India, a local taxi driver has launched a scathing attack on the German saying “driving round in circles in a 200mph car is easy, he should try the M25 on a Friday lunchtime in a Ford Mondeo filled with a fragranced cloud of Magic Tree vanilla.”

Claiming he could do better with his eyes closed, Tommy Alwright from Harold continued his verbal assassination of Vettel’s achievement by comparing the standard of conversation each driving professional has to endure.

“If all I had to do was get from one place to another with someone telling me my tyres are okay and that I just need to go round again, life for this ‘real’ driver would be a piece of piss. But you get Christian Horner to ask him if he’s been busy at the beginning of every lap and see how long it is before he cracks.”