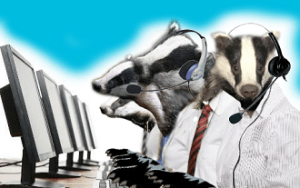 Bank of Harold bosses have dismissed as ‘scaremongering’ union claims that customer service would be affected following the bank’s move to replace all call centre staff with a large colony of badgers.

Bank chiefs insist that it is unrealistic to expect to pay human wages in the current economic climate, and point out that the considerable savings made will be sufficient to safeguard the bonus structure for several years to come.

“The real beauty of the plan is that badgers don’t require money,” explained CEO Howard Bing. “In fact, they have no concept of finance whatsoever, preferring an entirely slug- and beetle-based economy, where immediate consumption is very much the norm. And with the slug/pound exchange rate where it is right now, we’re quids in.”

END_OF_DOCUMENT_TOKEN_TO_BE_REPLACED

Filed under Around Harold, Badgers, Business