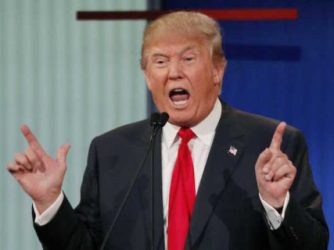 An exasperated head of the UN has ordered Donald Trump and Kim Jong-un to get their todgers out and have them measured at the same temperature, under laboratory conditions.

“We’ve had enough of them using metaphors, like the size of their hands or their nuclear weapons strength for the size of their schlongs” said UN Secretary General, António Guterres, “so now’s the time to see if either of them can match eight half-crowns.”

Trump’s obsession with the size of his old man dates back to college days, when several women said that he was the biggest dick on campus.

For many months Trump thought this was a compliment but after someone finally spent an entire long weekend, patiently explaining it to him, he has devoted his life to proving he has the biggest tallywhacker in the world.

“He’s certainly a massive penis.” said a spokesperson for Theresa May “Does that help?”

One Response to UN finally intervenes in Trump/ Kim Jong-un spat. “Right, here’s the tape measure. Slap your cocks on the desk!”