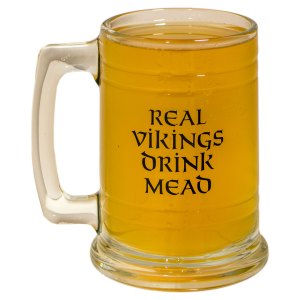 Mr Østergård told The Evening Harold, “We’ve been brewing our own mead at our micro-brewery site for a number of years now, and had been content with only supplying our product for Viking social events.” Looking ruggedly, and wistfully, out over the River Gluggle, he continued, “But as the trend for arsey, over-priced bottles of ale with twigs in has grown, so has our Viking desire to take over the world. In this case, it’s the world of poncy alcoholic drinks. Our selection of meads are available in both bottles and animal horns, and we’d like to remind our customers to rape and pillage responsibly.”

Landlord of The Squirrel Lickers Arms, Eddie, initially refused our request for comment, then called us back over and gave us this, “Those long-boat obsessed bastards have gone too far. I didn’t mind them muscling in on trade when it was just the occasional village festival, after all, there’s enough drunks and wasters around to keep us all busy, but now they’re taking the piss.” Breaking off to wipe his nose on his hand, Eddie continued, “My customers are a more discerning crowd, who come here to sample our home-cooked meals, and enjoy my sophisticated menu of top shelf cocktails. Our reputation is as a warm and welcoming hostelry, and I’ve been nominated as Local Publican of the Year for 37 years running. Now, if you’re not ordering anything, fuck off.”

Owner of Veggie! Veggie! Veggie!, and follower of all new trends, Pippa Delaney told us that she welcomes the opportunity for more choice in the village, and that anything with ‘artisanal’ in its name can only be a good thing.