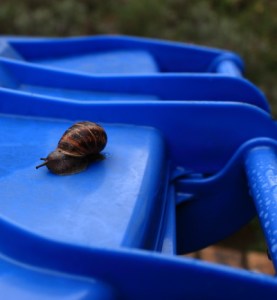 Astride the blue recycling bin

Snails have been feeling upbeat today after moving up a rung on the evolutionary ladder, according to a new study using the Brexit negotiations as a benchmark.

“Talk about deja vu,” said John Snail. “I’ve been all the way to the bins and back and the talks still haven’t moved. I’ve seen grass grow faster. It would be quicker if I set off to France myself and negotiated a deal with an escargot. It would probably be a better deal too. And with less slime.”

“They said no deal wouldn’t be the end of the world.  I’ll tell you what Armageddon is. It’s when the time comes to cut back the ivy and the Snexiteers discover ‘an invasion of snails’. We’re not an invasion, we bloody live here! But oh no, in the bucket we go.”

“And now they’re within ‘touching distance’ of talks beginning? That’s like me saying I’m within touching distance of the Acropolis. Right, I’m outta this bucket and setting off for Greece. I’ve got a point to prove.” 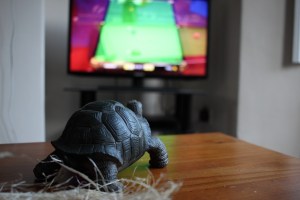 This isn’t the first time leisurely moving creatures have had to be re-evaluated.

Last year, tortoises were awarded elevated status after it was discovered they found watching the snooker painfully slow.

Comments Off on Snails now technically moving faster than Brexit