M5 repairs will last forever, “or… could we do some work on it?” asks Grayling 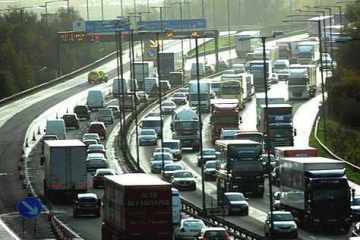 Crying out for the rigours of the tax haven

Highways England say roadworks on the M5 near Worcester could last another decade or more, as they’ve only had one man working there since October 2015.

“Mostly he picks up crisp packets and condoms discarded by commuters stuck in traffic.” said a ministry spokeswoman “On a slack day, he polishes the ‘Thank you for driving carefully signs’.”

Building on his experience of buggering up the Justice system, Chris Grayling hopes to repeat the trick in Transport, by splitting the M5 into separate parts, then selling off different lanes to corporate barracudas based in the Cayman Islands. First though, Grayling is willing to invest in a second worker, so that the roadworks can be kept clean and tidy, seven days a week in preparation for sale.

“Of course, Labour are against this plan, as they are with any other modernisation.” says Grayling “But what they forget is that the Government will still own the slip roads, bridges, central reservations and potential liabilities. When you look at it like that, it doesn’t seem so silly now does it? Eh?”

Comments Off on M5 repairs will last forever, “or… could we do some work on it?” asks Grayling