“Thank f*ck that’s over.” says a weary UK “Can we go back to Syria and refugees now?” 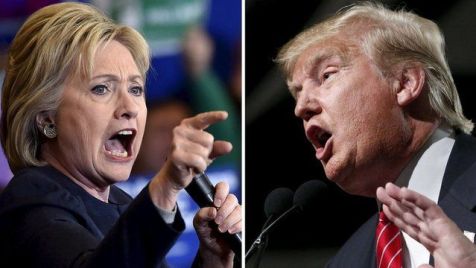 Wearied by the spewings of a malevolent, sulky troll over the past month, the UK has rediscovered its interest in Syria and migrants drowning in the Mediterranean.

“I got emotionally dulled by pictures of children covered in blood and dust.” says Harold’s Carly Jeffery “So in October, the prospect of a 24×7 reality show about an orange sociopath with anger issues trying to grab the US nuclear launch codes, came as light relief.”

“Much like a James Bond film lasting a whole month. Not like watching Spectre or Skyfall, which only seemed to last a month, I mean a real month. With things happening and a plot you could follow, but now I’ve had enough.”

As a primary school Teaching Assistant, Jeffery got fed up with Trump and Clinton’s constant bickering and now wants to get back to real life. And death. “If kids behave like that I just get them to say sorry.” With Trump however, Jeffrey is on unfamiliar ground. “I just wanted to punch his lights out. I suppose I’ll get arrested for saying that now.”

Comments Off on “Thank f*ck that’s over.” says a weary UK “Can we go back to Syria and refugees now?”

Filed under News, US Elections