Boris’ opposition to Heathrow was just “an academic exercise, exploring its many benefits” 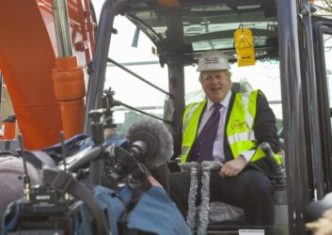 Remember? Boris said he’d be driving one of these

“When people thought I was against it, I was running for Mayor of London but now I’m Top Kiddie at the FO and planning to stay.” Boris Johnson bumbled today, describing how his perceived opposition to a third Heathrow runway was merely him exploring its benefits for himself.

Johnson explained that protesters must, in some strange way, have got hold of the wrong end of the stick, whilst he was in fact just convincing himself how weak their argument was. “I didn’t expect anyone to think I was expressing a genuine belief though, because I don’t have any.”

“Yes I did say that I’d lie down in front of the bulldozers” bumbled the Foreign Secretary, responding  to questions “but I meant on a chaise longue, reflecting on how good and pleasant it is to be in charge at the FO. I’m glad to make that clear for any dullards.”

“But if you check your records you’ll surely find I made other statements too, such as that I would be wearing a high viz, actually driving one of the bulldozers.”

“Probably into the wrong houses though, you know me!” Johnson laughed, adding “Wiff waff, wiff waff, cuddly old Boris and his funny hair. Does that shit still work?

Comments Off on Boris’ opposition to Heathrow was just “an academic exercise, exploring its many benefits”