“I was a young wizard who defeated the White Witch”: angry Clegg denies new book is full of lies 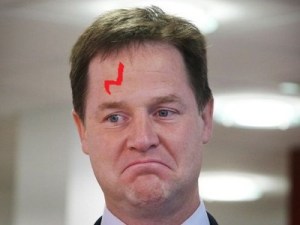 It’s true. He’s got the scar and everything.

A furious Nick Clegg has taken to social media today to refute allegations that his new book Between the Extremes is less credible than the guy who works down the chip shop who swears he’s Elvis.

“My father’s family name being Pirrip, and my Christian name Philip, my infant tongue could make of both names nothing longer or more explicit than Pip. So, I called myself Pip, and came to be called Pip or Nick Clegg for short,” he claims in a lengthy Facebook post which goes on to detail his early years living with his sister and her blacksmith husband Joe Gargery before his life was changed for ever when a convict called Abel Magwitch escaped from a nearby prison hulk and gave young Nick his Hogwarts letter. “After Hogwarts I felt a calling to do some good in the world so I went to Narnia as a freedom fighter before settling down in Ankh-Morpork as a member of the Watch under the inspirational Commander Vimes.”

“Why are there so many doubters?” he later tweeted. “Surely this is easier to believe than me writing a book claiming that after spending five years firmly up their bottom I never actually supported the Tories.”

Comments Off on “I was a young wizard who defeated the White Witch”: angry Clegg denies new book is full of lies

Tagged as Between the Extremes, Evening Harold, Nick Clegg