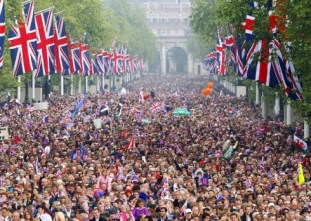 The Mall, two minutes ago

A deliriously joyful nation has taken to the streets this morning to praise its new Prime Minister. A packed program of events sees celebrations taking place all over the country as Brits chuckle themselves to the point of orgasm over the ascension of another unelected leader who has consistently voted in favour of military intervention abroad and increased powers for the security services to monitor people’s activities at home.

In Crawley a troop of Sea Scouts will give a CPR demonstration accompanied by the theme music from TV’s Drive and in Tamerton Foliot pensioners will be attempting to make the South West’s largest ever cheese and ham toastie then refusing to share the end result out of spite. Meanwhile on the Isle of Man an undertakers will be offering all clients the opportunity to play no less than three hands of Omaha High-low Mixed as they choose wood type and handles.

The Labour Party has said that it would comment on the Tories’ ability to go from one leader to another reasonably smoothly in just two weeks but they’re busy launching an inquiry into who ate all the Monster Munch at last night’s secret ballot and couldn’t possibly be distracted at this crucial time.

Comments Off on Hooray, it’s May Day!

Tagged as Evening Harold, theresa may