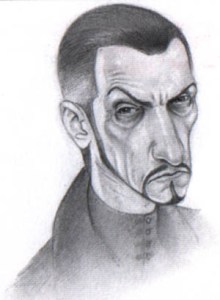 At last a leader with convictions, intelligence and razor-sharp cheekbones

The UK is under new leadership this morning following a coup by the Patrician of Ankh-Morpork, Lord Havelock Vetinari.

“Coup is a needlessly dramatic word,” Lord Vetinari told reporters. “I can hardly be said to have violently thrown a government from power when you don’t have one, or an Opposition. Both sides seem entirely preoccupied with what one might call ‘internal matters’. Indeed barely anyone noticed as I walked into Number Ten and installed myself in the best office and Drumknott in an suitable alcove nearby. The only person to do more than raise an eyebrow was Theresa May who I must say kicks like a mule and has a command of the baser aspects of the English language that is entirely formidable.”

Until yesterday Vetinari was the tyrant of Ankh-Morpork the largest and most powerful city on Discworld. A place known to us through the life-enhancingly brilliant reporting of much-missed travel writer Sir Terry Pratchett. Today Lord Vetinari says he’s the man to lead the UK through the Brexit crisis.

“A firm hand is all it takes,” he said calmly. “A firm hand and a willingness to negotiate. I look forward to meeting Angela Merkel and Jean-Claude Juncker immensely. I do hope that they like to play Thud.”

“Domestically things appear to be very untidy here however I shall soon have the donkey down from the minaret, or, to put it another way, the Farage back in the saloon bar.”

Lord Vetinari will be unveiling a full program of laws this afternoon in the meantime he advises everyone to stay calm and go about their business. Everyone that is apart from mime artists.

2 Responses to Lord Vetinari takes control of the UK