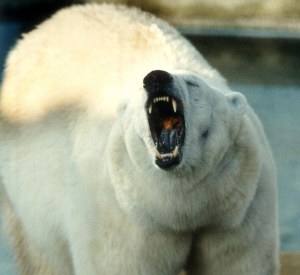 As the Brexit and Remain campaigns launch into their final fevered day of shouting at the rest of us like we’re all five and didn’t go to the toilet when Miss told us too and now look at the mess there is concern on both sides that voters aren’t yet sufficiently terrified.

“I don’t want people mooching into the polling centre early evening to casually take part in a little light democracy,” said Boris Johnson. “I want them queuing up half the night scared beyond words by the thought that if they don’t get that cross in the leave box as soon as possible 800 million Turks will invade by teatime and bugger the NHS to death with a simit.”

“There can be no room for complacency,” said David Cameron. “And frankly at this late stage no room for reason. I want primal fear making people beg to get in there and vote. Let me tell you this, if Britain does not stay in Europe everyone will be stung repeatedly by a swivel-eyed wasp and George R.R Martin will never finish A Song of Ice and Fire. Oh and something about house prices too.”

Despite what you may be told today one hundred per cent of the meteorologists we polled are confident that the sun will rise on Friday morning.