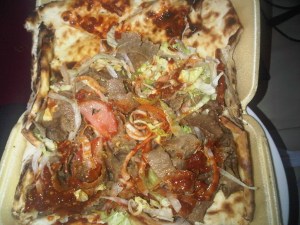 Scientists at Dunstable Metropolitan University were stunned by results of a DNA analysis of the chili sauce at local Harold kebab shop I Shish You Not!, when data showed that no human semen was present, a new report revealed today.

“We had always assumed that the employees were rubbing themselves off like a troop of monkeys back there,” commented Dr Pauline Copland, lead food scientist at Dunstable Met where the study was performed.

However, it seems the urban myth that there is no ejaculate in the post-pub treat may turn out to be true.

“When the first results came in we thought we were seeing things. We did that thing where you look away quickly then look back again, and then rub your eyes with your fists.”

But no matter how many times Dr Copland’s team ran the tests, the result came up the same – the sauce was 0.00% spunk.

The results also came as a surprise to customers of the popular kebabery, with many refusing to believe the results of the six month study.

Dr Copland reassured patrons, though, as although jizz-free, the sauce does contain dog urine, ear wax and vaginal mucus in excess of recommended levels.