Fumes of Mordor not technically ‘weather’ 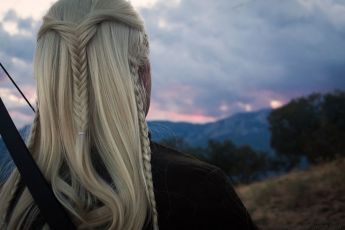 Sod the red sky at night bollocks, what about his gorgeous hair?

Harold’s new weatherman, Nicholas Legolas, has been fired after viewers complained about his “overly dramatic” style.

The handsome blonde, thought to have been employed for his good looks and piercing eyes, often adopted a portentous tone when delivering reports on Harold’s latest meteorological activities.

“He is a lovely looking lad” said Doris Kettle, “with hair like a Pantene advert, mine were never that shiny, not even when I were young. But I don’t need to know about the fumes of Mordor of a morning, I just want to know if I can put me delicates on the line to dry.”

Doris’ daughter, Julie, agreed. “I do love his cheekbones, and his skin! It’s so creamy. It’s just that he can be a bit intense. What was it last week mam? The wind was up a bit, and instead of talking about isobars, he was banging on about a ‘fell voice on the air’. It was a touch creepy to be honest.”

Edward Murphy, producer of Harold Today, the popular local news programme, agreed that it was a “necessary shame” to bring Legolas’s contract to an end. “The final straw was yesterday, when rather than referencing the beautiful sunrise in the traditional way, he informed our viewers that ‘blood has been spilled this night’. A lot of our audience is within the older demographic, it isn’t good for them to hear that kind of thing, you know, with their weak hearts and all.”

When we approached Legolas for comment, he seemed unwilling to discuss his sacking, saying only that “The ring must be destroyed” before muttering about something drawing near, and how he could not linger.

“He always was a bit odd” said Mr Murphy, “we won’t miss his strange comments or his bow and arrow. His hair though, it’s like spun gold and smells like marshmallows. Now we will be sad to see that go.”

Comments Off on Fumes of Mordor not technically ‘weather’