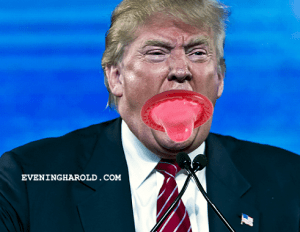 Donald Trump has been heavily criticised by hard-line Republicans for performing an early termination of his abortion policy today.

Trump’s latest indiscretion, in which he proposed that women having abortions should be punished, came out of the blue and was seen by many close friends and family as deeply embarrassing.

The policy, which was unplanned, is believed to have been the result of a one-night drop in the polls which Trump would rather put behind him.

“It’s my policy and I should be allowed to do what I want with it,” he insisted. “I won’t have a bunch of journalists who aren’t even politicians telling me what to do with my decision-making apparatus.”

Trump argued that his abortion policy wasn’t ever actually viable, and little chance of survival, but the same could be said about all the other policies he’s shamelessly plucked from his arse.

His campaign team are now said to be experimenting with a thin rubber sheath which rolls over Trump’s head,  designed to block any undesirable ideas from getting out of his mouth into the outside world.

“He needs all the protection we can get,” explained a spokesman. “We call it the ‘conDon’.”

Comments Off on Trump criticised for abrupt termination of abortion policy