Banksy to relaunch a Dismaland the size of Wales, in Wales 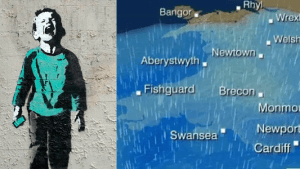 It’s not always this good…

Inspired by the closing of the Port Talbot steel plant and the 81 consecutive days of rain in Pembrokeshire, Bristol spray can dauber Banksy has announced the relaunch of Dismaland, this time on a national scale.

“You have had to pay the entry fee at the Severn Bridge for the prototype that has been running for a few decades now anyway, so people are ready for the step up” said the celebrated vandal.

Rides and attractions will include playing Countdown with no vowels, hunt the Manic Street Preacher and learning how to say Port Talbot correctly.

A formalised Welsh Dismaland project has been welcomed by those who go caravanning for a weekend in Rhyll once a year to remind themselves that having their benefits cut and queuing up at food banks in Manchester to survive is not so bad after all.

Construction begins as soon as the steel arrives from China.

Comments Off on Banksy to relaunch a Dismaland the size of Wales, in Wales