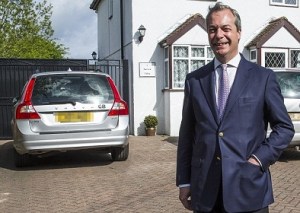 British Police are to urgently interview the entire population of the UK after it emerged that an attempt had been made to murder UKIP leader Nigel Farage.

“We have identified a list of suspects who had a motive to kill Mr Farage,” announced Deputy Commissioner Bunsen of the Metropolitan Police. “This list contains the entire population of the country, excepting the gentleman himself, of course.”

“The motive most of these people seem to have for the attempted murder is that Mr Farage is a giant tosser,” explained the Deputy Commissioner.

“The exception being UKIP supporters, who see him merely as a tosser.”

Enquiries are in the early stages, but it is believed that the entire population of the UK queued up next to Farage’s volvo while he was having a pint in a roadside pub, and each person loosened a wheel-nut a tiny bit.

“I know I did,” insisted Deputy Commissioner Bunsen, “And I’m pretty sure everyone else in the country was there too.”

The result was a tragic accident in which Farage failed to be injured in any way.

It is possible that the idea for this terrible joint enterprise came from the famous Agatha Christie novel Murder on the European Express, in which 64 million people take part in murdering a right old tosser.