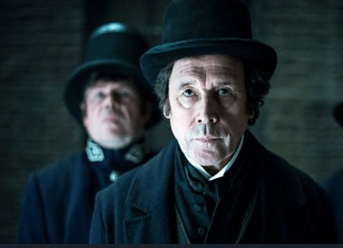 BBC One has blown the nation’s minds with Dickensian, a lavish 20-part drama that’s more confusing than a riddle wrapped in the Enigma code inside a clue from 3-2-1.

“I thought it would be a fun story featuring the most famous Dickens characters,” said viewer Ange Harris. “But it’s unfathomable. Who are the Barbarys, what’s a Captain Hawdon, and am I allowed to laugh at the name Fanny Biggetywitch?”

“You have to like it though, don’t you?” she said. “All the actors are talking like they do when it’s Shakespeare so you know that if you’re confused or bored it’s your fault.”

“It’s weird though because Dickensian is fanfiction. So I don’t understand why the BBC has spent millions and millions of pounds on it because fanfiction’s usually online for free. And this is just people in hats shouting. Internet fanfiction’s better because you can understand it and most of it’s ninety-five per cent kinky filth.”

Dickensian has eighteen episodes left to air. At the end anyone who can coherently sum the plot up in less than 1000 words without using diagrams will be ordered to report to Bletchley immediately.

Comments Off on BBC’s Dickensian more confusing than Enigma code