Office violence in Harold as ‘Best Ever Xmas Hits’ CD repeats for the 100th time. 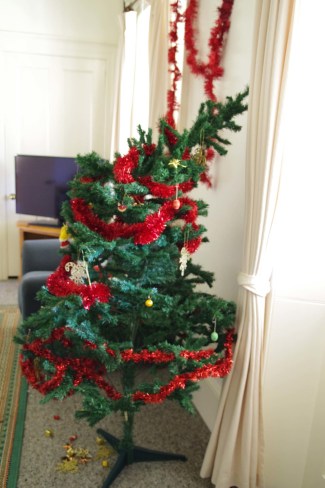 With only 3 days of December gone, violent episodes in offices and shops across the village have begun to soar as Christmas CD repeat plays hit intolerable levels.

Emergency services have reported a jump in the number of stapler based injuries and Dunstable hospital is calling for more blood donors following a spate of viscious paper cuts.

Michelle Wellings of local firm Hardware Solutions was hit in the eye with a hole punch thrown by one of her colleagues.

“It was awful” said the 27 year old HR executive. “Just as Elton John’s ‘Step into Christmas’ came on again he went bananas. Started emptying out the waste paper bins on his head and making weird whimpering noises. It got worse as Chris de Burgh began singing ‘A Spaceman Came Travelling’ and  when Cliff came on with ‘Saviour’s Day’ he just exploded and started trashing the office. It’ll take Cheryl from admin ages to clear that lot up”.

Sales Manager Peter Buckworth was arrested at the scene but later released on police bail.

In a statement outside Harold police station Mr Buckworth said “It was a moment of madness. I’d had hours and hours of Slade, Wizzard, Jona Lewie, Paul McCartney, Mike Oldfield, Paul McCartney, Slade, Slade, Jona Lewie on endless loop. 22 times I’d listened to ‘Do they know it’s fucking Christmas?’ And when East 17 started up again with ‘Stay another bollocking fuck bastard Day’ I just flipped. I lost it. I mean, it’s not even a fucking Christmas song is it? What’s it doing on those albums? Why? Why?”

As Mr Buckworth was led away sobbing into a mental health worker’s shoulder, PC Flegg called on office workers to keep calm in the face of extreme provocation.

“Don’t let George Michael get under your skin this Christmas, stay safe, remain calm and remember anyone caught trying to smuggle Michael Bublé into the Police station this December will be spending Christmas with Bing Crosby, got it?”.

Comments Off on Office violence in Harold as ‘Best Ever Xmas Hits’ CD repeats for the 100th time.