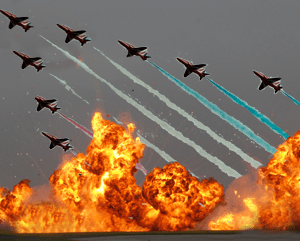 The first sortie against Daesh forces in Syria has been applauded across all parties, after it was completed by the Red Arrows streaming patriotic smoke.

The world-famous display team drew croweds of admirers, before accidentally killing a family of seven while flying in the diamond formation.

But the survivors really enjoyed the bit where they flew at each other and swerved at the last minute; “My mum would have loved that”, gasped one survivor, “if she hadn’t been blown up a few seconds earlier.”

Flying impressively close to each other, the squadron took it in turns to strafe three pick-up trucks and a refugee camp, before forming a lovely heart in the sky and returning to Blighty.

“I wish we could have done more to bring freedom to the people of Syria”, said wing commander Jeremy Thrapston. “But unfortunately, we had a prior booking at the Blackpool Illuminations.”