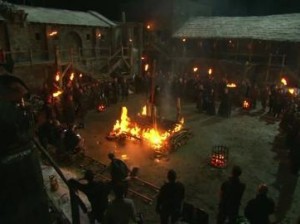 Like all State occasions this one has been relentlessly rehearsed with Her Maj’s Scottish home, Castle Black, standing in for Buck House

As republican and reminder of a lovely teacher you had at school, Jeremy Corbyn, continues to weigh up the pros and cons of bowing to the Queen when he is made a privy counsellor, Her Majesty has entered the debate by saying that he will “burn if he doesn’t bend the knee.”

The Queen is set to have Corbyn executed on the grounds that she’ll do whatever it takes to “get some respect.” She went on to add that “dear Cousin Stannis had the right idea.”

Buckingham Palace insiders say that Corbyn has been in the Queen’s sights ever since he chose not to sing the national anthem at a Battle of Britain memorial service. “What people don’t realise is that it’s genuinely her favourite song,” said our source. “If it’s not sung by everyone at full volume Herself goes spare. What’s in the handbag? A list of everyone she’s spotted not singing at the top of their voice for God to save her.”

Despite the threat of a grisly and public death Corbyn insists that he will not be rushed into making a decision. However, having just polled a net satisfaction rate of minus 3 in a Mori opinion poll if the Queen doesn’t set fire to him there’s a high chance that at least one of his colleagues will soon set about ensuring his demise.