‘Emotional’ Queen ‘goes on a brenda’ 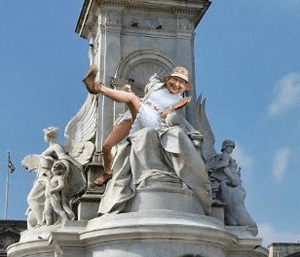 Queen slurred the National Anthem, before sicking on a corgi.

The Queen has finally been subdued and arrested after a drunken rampage in Central London which left eyewitnesses both appalled at the carnage and impressed by how supple she is.

Her Majesty had been celebrating becoming the UK’s longest reigning monarch, beating Queen Victoria’s previous ‘scowl ‘n’ wave’ record of 63 yrs and 216 days by one day and counting.

Police were called to Buckingham Palace after tourists alerted them to ‘an elderly lady drenched in gin’.

Queen Elizabeth was seen climbing a statue of Queen Victoria on The Mall, not far from her official London residence, and shouting “Who’s the fucking daddy now, Vicky?

A spokesman for Buckingham Palace said it hadn’t been quite as bad as the late Queen Mother’s 100th birthday celebrations, when it had taken them months to get the stains out of the corgis and to reupholster the Duke of Edinburgh.

The Queen faces a maximum term of two weeks at her pleasure, the same sentence served when Prince Philip was hospitalised with a bladder infection.

Comments Off on ‘Emotional’ Queen ‘goes on a brenda’