Misunderstood Bin Laden only wanted to be a Radio 2 DJ 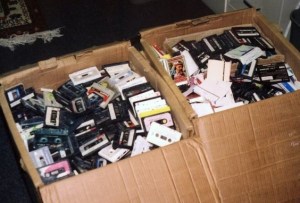 It has been revealed that discovered amongst the piles of easy listening tapes left by al-Qaeda leader Osama Bin Laden were a number of demo tapes in which the arch-terrorist brushed up his DJ patter whilst introducing songs by Cliff Richard and the Nolan Sisters.

From his whimsical style, it seems that Bin Laden saw himself as a Middle Eastern Terry Wogan, and his witty comments about the frustrations of his daily life of a revolutionary are quite amusing – if you put aside the atrocities which he directed.

Broadcasting veteran Paul Gambaccini has heard the tapes, “They show a surprising ability with Bin Laden’s monotonous voice reminding me of the great John Peel at times,” said the DJ. “His choice of music is subversive in that he plays album tracks rather than singles, but he does make an exception when playing Cliff’s ‘Congratulations’ as a backing to a series of comments following the World Trade Centre attacks.”