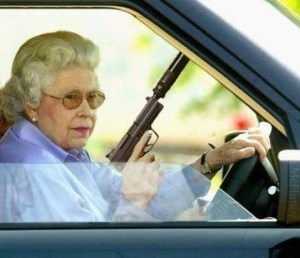 An elderly Windsor woman is likely to be disqualified from driving after an incident in which she drove across a Royal Park, nearly hitting a young couple walking their baby.

The woman, who has not been named, is reported to have claimed that she mistook the young family for another couple she knew and their “latest brat” and swerved away the moment she realised her mistake.

The arresting officer, on her first day of secondment to the Windsor division, said she was astonished by the attitude of the woman, “She drove all over the Great Park as if she owned it,” said WPC Flegg, “and when I ordered her to stop the car, the pensioner said in a withering tone ‘Don’t you know who One is?’”

“Of course following normal Police procedure I then proceeded to tazer her, but I was amazed how the plucky old dear still managed to mutter something about ‘the Tower’ while writhing on the ground.”

This is not the first incident of senior citizens behaving badly in the Park. Police have received a number of complaints about an elderly gentleman with a penchant for upsetting ethnic visitors by asking them when they are planning to go home.