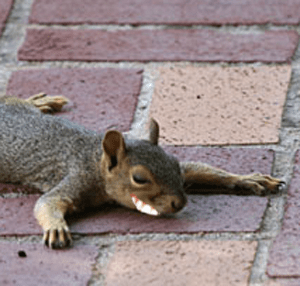 A pub in Harold has been vandalised by a ‘drunk squirrel’, which went on to clone a credit card and watch pornography.

The incident was discovered by the landlord of the Squirrel Lickers Arms, after he returned from a mushroom exploring course in the woods.

“Yeah, it was definitely a squirrel, and it was off its head”, said Eddie. “The little scamp had eaten all the peanuts, and accidentally knocked a beer tap to ‘on’.”

“Then it apparently opened a bottle of wine, using its little squirrel hands to operate a cork screw. And then it made an electronic copy of my credit card, and watched some appalling filth.”

“It seems these simple woodland creatures enjoy watching humans have sex as much as you or I”, said the barman. “Well, you anyway. I’ve never watched it, I’m not sure what it is.”

It’s not the first time a delinquent rodent has caused trouble in the village: in May a stoned guinea pig crashed Eddie’s car and then repeatedly sent text messages to his ex-wife.