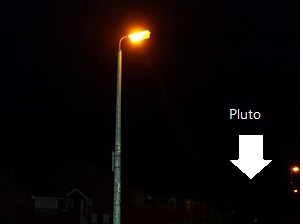 A brave local amateur astronomer who has captured his best ever photograph of demoted planet Pluto following a hazardous mission, has claimed the risks of clambering onto a dustbin in the middle of the night for a better view were well worth taking.

“Despite the risks, I’m delighted with the photographs,” Gerald Snoad said last night after coming out of a ten day period quarantine as a precaution against deep space contamination. “It just goes to show what you can do with some meticulous planning.”

“I believe my photos have captured the loneliness of Pluto, which is essentially an insignificant dot on the horizon, just beyond the Dunstable by-pass.”

It could so easily have been different.  The successful space shot was almost aborted when the council delivered a new wheelie bin to Mr Snoad’s Harold based mission control HQ.

“It was a tremendous shock and coming only 24 months before zero hour, it could have wrecked the entire mission,” recalled Mr Snoad, “but after careful measurement and recalculation, I realised that the only significant change was the colour of the bin from brown to green and decided to proceed with caution.  This was my Apollo 13 moment.”

Mr Snoad will to continue his space programme with an expedition to boldly go to his garage roof which is already several years into its planning stage.  “The shots from up there should be Hubble-like in quality,” he said optimistically.