BBC loses rights to The Archers 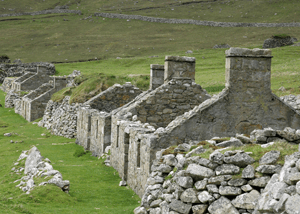 Ambridge, towards the end of Season 1.

In a major coup for the satellite broadcaster, popular soap opera ‘The Archers’ is moving to Sky from November.

Despite being a staple of Radio 4 for the past 64 years, the drama will now be televised exclusively on Sky Ambridge HD.

“You read that right, you’ll be able to gaze upon a Grundy for the first time”, said director Alan Rothskid. “But only in the first episode, when they’re evicted to make way for a golf course.”

Many of the rural families that are known and loved by loyal listeners, will be written out during the first 24-episode season.

“The Archers prides itself on reflecting the realities of rural living”, said Rothskid. “Which is why we’re going to bulldoze most of it to make way for an airport, some windfarms and three fracking sites.”

The Archers has often flirted with controversy in recent years: last April there was the first broadcast of a wedding between nine lesbian sheep.

“We’re going to remain loyal to the original vision of reporting on current rural affairs”, pledged Rothskid, “which means the original cast will be replaced with stock brokers.”

In a compromise, the show will no longer be broadcast twice a day, and will instead just fill the evening slot.

“There’s no point in the lunch time show, because everyone’s away working in London”, revealed Rothskid. “Instead we’ll just loop the same footage of some gypsies stealing caravans and setting off a house alarm.”

Comments Off on BBC loses rights to The Archers