Chancellor: this will hurt you more than… actually it’s just going to hurt 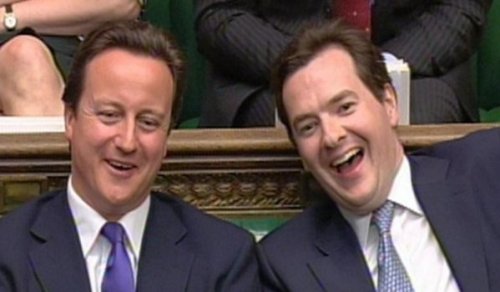 The first Tory budget since 1996 aims for rich people to keep more of the cash they’ve got from poor people. “We’ve a lot of years to make up but it’s much much more than just revenge.” insists George Osborne.

“It’s also about stopping the poor getting any of the cash that belongs to us. Out by the back door. For medicine, education; that sort of thing. Have fewer kids, poor people! Fewer kids, less costs. Or should that be ‘less kids’?”

With only a fixed five year lead-up to the 2015 election Osborne wasn’t able fully to work out where £12b welfare cuts might fall. “But then, in June, two GCSE economics students were on work experience at the Treasury and after three days on my Amstrad PCW they came up with an answer no-one expected – benefit cheats. Sorry, claimants? Same thing isn’t it?

The Chancellor explained how the ‘fun, human touch’ hasn’t altogether been lost from government plans and the bigger changes will now be phased in over three years, not two. “Mainly because it hurts more that way. Like taking off a sticking plaster which has been baked on for days. To your kid sister’s skin.”

One Response to Chancellor: this will hurt you more than… actually it’s just going to hurt