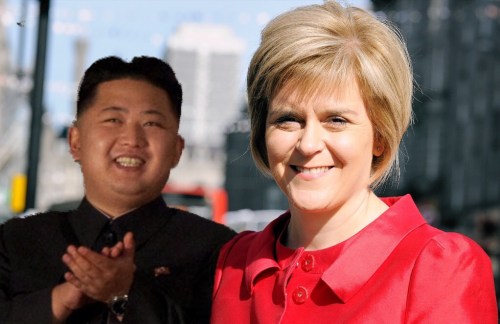 Kim Jong Un has been the first international leader to congratulate Nicola Sturgeon on her party’s success in Scotland in the General Election.

Following the type of victory in one country normally reserved for dictatorships, Mr Kim has said he was impressed at the lack of purging of political opponents involved in her landslide.

“I can’t help but get a general who fears for his life to take my hat off to her”, the North Korean leader said.

“The lack of killing to achieve a one party state is impressive. In fact, the only thing that seemed to have died as a result is Ed Miliband’s career.

This is the first time Mr Kim has got involved in praising British politicians since he congratulated Ed Miliband for stabbing his brother in the back.

“It’s not quite feeding your uncle to the dogs, but for a man who struggles with a bacon sandwich, it was a good start.”

Nicola Sturgeon and her SNP colleagues are now hoping to use their increased influence in Scotland to make some sweeping changes.

“The face of Scotland has changed forever,” she said during a military victory parade.

“And not only the face, but the hair too. All men are hereby ordered to go to the barbers and get a compulsory Salmond Cut.”