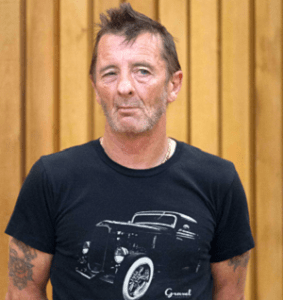 Phil Rudd, the drummer for AC/DC, has been sentenced to three years in Whitesnake.

Rudd pleaded guilty to charges of threatening to kill a former employee, but denied possessing a copy of the single “Is this Love”.

“Clearly, that must have been planted by someone”, said Rudd. “And if I find out who it was, I’ll have them ki…ssed?”

Amnesty International has condemned the punishment, and called for it to be commuted to a fortnight in Def Leppard.

“Until now, Rudd hasn’t had a criminal record”, said his lawyer Bruce Grobellaar. “Although he admits the stuff they released in the ’90s came close.”

Life in Whitesnake is known to be incredibly harsh: some who have served it end up taking their own hearing.

“It’s the thought of solitary confinement that scares me the most”, admitted Rudd. “We never had that in AC/DC. Imagine being on my own for what…7 or 8 minutes? Just banging away, with not so much as a bass line. And all the while you’re thrashing away at the solo, there’s the threat that when it ends, David Coverdale will come back out.”