Sky announce Hammond v May pay-per-view fight: both aim to be sacked 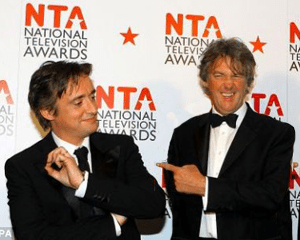 With heavyweight Clarkson no longer a contender, James ‘Ironing’ May and Richard ‘Anklebiter’ Hammond are hoping to follow in his footsteps and get sacked by the BBC.

In a pay-per-view fight exclusive to Sky, the two featherwits will attempt to punch their way out of their contracts.

“May doesn’t scare me”, said Hammond. “Except when he stands up, looks disapprovingly at me, moves suddenly, wears a bright shirt or mentions me on Twitter.”

With a double knockout seen by many as the only way of getting out of a world Top Gear tour, both gladiators have been practising moving their arms.

“My cuffs are quite big, and so is this watch”, said Hammond. “But if I pretend I’m bigger, I could lift them up. How hard can it be?”

May meanwhile has gone for a clever deceit, substituting himself for Mike Tyson wearing a helmet.

“He did bite my ear off, but it was a small price to pay”, roared May. “Unlike the one Sky has written into our new contract.”

Punch-drunk, stupified and hungry for more, the three motoring journalists should appear on Sky Oaf HD in the summer.

Comments Off on Sky announce Hammond v May pay-per-view fight: both aim to be sacked